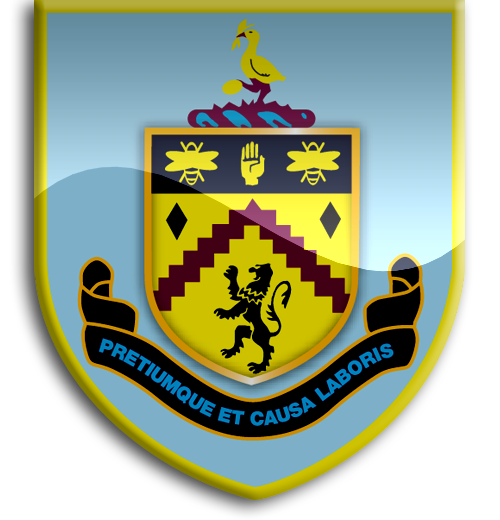 
Sport was first played at the Turf Moor site in 1833, when Burnley Cricket Club was founded and made the ground their home.

Horse racing also took place at the site in 1840. In 1883, the cricket club invited Burnley Football Club, which had been formed in 1882, to move from their original home at Calder Vale to a football pitch adjacent to the cricket field.

The first football match at Turf Moor took place on 17 February 1883, when Burnley were defeated 3–6 by Rawtenstall.

Attendances at Turf Moor during the early years averaged at around 2,000, although a crowd of 12,000 descended on the stadium on 29 March 1884 to see Burnley lose 2–4 to local rivals Padiham.

For the first two years, spectators were forced to congregate around the pitch, so in 1885 the club built an 800-seater wooden grandstand along the Brunshaw Road side (the south side) of the ground and installed terracing for 5,000 people at the ends of the pitch.

The following year, Turf Moor became the first senior football ground to be visited by a member of the British Royal Family when Prince Albert Victor saw Burnley defeated 3–4 by Bolton Wanderers on 13 October 1886, while visiting the town to open a new hospital.

Bird's eye view of a football stadium with a grass pitch. Two sides of the ground have covered stands while the other two have uncovered terracing.

Five minutes into the game, Burnley centre forward Fred Poland scored the first ever league goal at the ground.

In 1891 the Burnley Union Star Football Club disbanded, abandoning their Rakehead ground, which was complete with its own grandstand.

Burnley bought the stand and moved it to Turf Moor. It became known as the "Star" stand and was erected on the site of the current James Hargreaves Stand, on the north side of the ground.

Sixteen creosote-fuelled lamps were placed at regular intervals along the sides of the pitch, and spectators reported that while the edges of the field were sufficiently lit, there was a dark area in the centre. Burnley won the match, beating Nelson 4–2 in front of a crowd of 3,000 people.

The "Star" stand was demolished in 1898 and replaced by a new, larger stand, although it was still referred to as the "Stars" stand.

Five years later, a second tier was built on the Brunshaw Road stand to accommodate club offices and in September 1903, Turf Moor was able to host the club's annual general meeting for the first time.

In March 1909 the "Star" stand was extended, with new turnstiles and barricades erected in preparation for the FA Cup Quarter Final against reigning league champions Manchester United.

In the spring of 1911, plans were unveiled for the rebuilding of the Brunshaw Road stand, with former Burnley forward Arthur Bell the architect for the project.

A strike amongst railway workers delayed the deliveries of steelwork for the new roof but spectators were still able to use the stand in time for Burnley's first home league game of the 1911–12 season. However, work on the dressing rooms had not been completed, and players from both teams were forced to change in the adjoining cricket pavilion.

A two-tiered football stand with claret seats in the upper tier and light blue ones in the lower.

In 1913 the Burnley directors decided to demolish the "Star" stand for a second time, just 15 years after it had been rebuilt.

In the same year, the Brunshaw Road stand was further extended to run the whole length of the pitch and in 1914 a roof was constructed to cover the terracing at the Cricket Field end, thus increasing the capacity of the ground to almost 50,000.

In 1922, Turf Moor hosted its only FA Cup Semi Final; a crowd of over 46,000 turned out to see Huddersfield Town achieve a 3–1 victory over Notts County.

The attendance was later confirmed to be 54,775, which is still a record for Burnley.

In 1927, Turf Moor hosted its only international fixture when England played Wales.

England lost the match 2–1, with Burnley captain Jack Hill scoring an own goal to give Wales the win.

In 1932, the Burnley Supporters' Club raised funds to install a hut and scoreboard at the Bee Hole End of the ground.

Six years later, plans were announced to build a new covered terrace on the site of the old "Stars" stand, but these plans were delayed by the outbreak of the Second World War.

The plans came to fruition after the war, and the Longside was completed in 1954.

The lights were first used on 16 December 1957, when Burnley hosted rivals Blackburn Rovers in a friendly.

On 16 November 1960, the stadium was the venue of Burnley's first ever match in the European Cup. Jimmy Robson and Jimmy McIlroy both scored early in the first half as Burnley recorded a 2–0 victory over Stade de Reims. 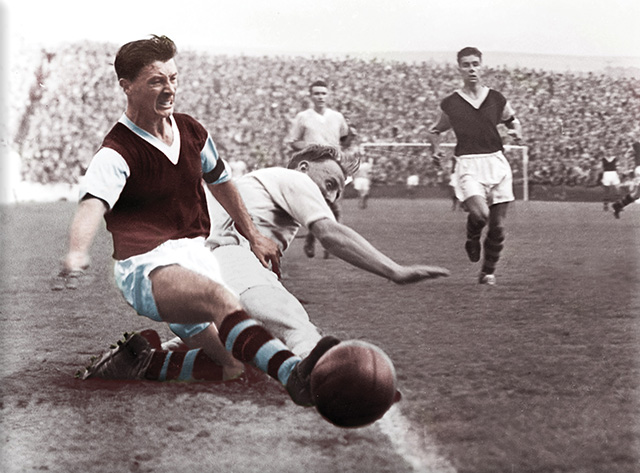 During the late 1960s, in an effort to prevent supporters from throwing missiles, a section of the Bee Hole End terrace immediately behind the goal was fenced off.

Under-seat heating was installed in the Cricket Field End, but after the first time it was used, chairman Bob Lord deemed it uneconomical and expensive, and it was never again switched on.

Redevelopment continued at Turf Moor and later in the early 1970s, the Bee Hole End terrace was extended.

The new extension had a capacity of over 7,000 and despite having no roof, it was very popular among supporters.

The pitch was raised and the slope that been ever-present since the club had arrived at Turf Moor was removed.

He then replaced the Brunshaw Road Stand with a new all-seater stand named after himself, which was opened in 1974 by then-prime minister Edward Heath.

In 1975, the floodlights that had been installed in 1957 were replaced.

On 13 May 1983, Turf Moor was chosen to host a match between Czechoslovakia and West Germany during the 1983 UEFA European Under-19 Football Championship.

A tragedy occurred at the stadium in March 1992 when 17-year-old apprentice footballer Ben Lee was killed in a fall from the roof of the Longside Stand, when trying to retrieve a football.

Following the installation of the floodlights, Turf Moor did not undergo any further changes until the mid-1990s.

After the Taylor Report had stated that all grounds must become all-seater stadia, the Longside's and Bee Hole End's days were numbered, and in December 1994 the club announced the redevelopment of the two standing areas.

In June 1995, Turf Moor hosted a match between England U21 and Latvia U21 in the qualifying campaign for the 1996 UEFA European Under-21 Football Championship.

On 16 September 1995, the last ever match was played in front of the historic Longside when Burnley won 2–1 against Hull City in a Second Division fixture.

The Longside, which had housed both home and away supporters, was subsequently demolished and the James Hargreaves Stand, for home fans only, was built in its place.

The new stand opened on 23 April 1996 for the visit of Bristol Rovers.

The new stand was named the Jimmy McIlroy Stand, in honour of the former Burnley forward and Northern Ireland international.

Two years later, England U20 drew 2–2 with Netherlands U20, with former Burnley midfielder Richard Chaplow captaining the England side.

On 25 May 2007, Turf Moor hosted a friendly international between England B and Albania.

Although the game was not officially recognised as a full international, a number of England first-team players played in the game.

In October 2007, a Barco video wall was installed in the Cricket Field End, which at the time accommodated visiting supporters.

At the start of the 2009–10 season, a new PA system was installed and the big screen was moved to allow home fans to sit in the Cricket Field Stand for the club's inaugural season in the Premier League.

Dyche was the longest-serving manager in the Premier League, having been in charge of the Clarets for nine-and-a-half years, overseeing a period which will go down as one of the most successful in the Club’s history.

During this time, the team was promoted twice from the Championship, achieved two top-half Premier League finishes and qualified for Europe for the first time in 51 years. 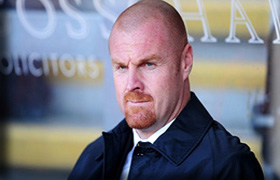 
Burnley Football Club is a professional Premier League club based in Burnley, Lancashire.

Nicknamed the Clarets, due to the dominant colour of their home shirts, they were one of the founder members of the Football League in 1888.

The club colours of claret and blue were adopted in 1910 in tribute to the dominant club of English football Aston Villa.

It was thought the colours might lift and inspire Burnley too. Their home ground since 1883 has been Turf Moor.

The Clarets also reached the 1961 quarter-finals of the European Cup.

They are one of only two teams to have won all top four professional divisions of English football, the other one being Wolverhampton Wanderers.

The club spent most of its early history in England's top two divisions, but remained outside the top flight from 1976 to 2009.

From 1985 to 1992 they had a seven-year spell in the lowest tier of the Football League.

In 1987 they narrowly avoided relegation to the Conference.

Between 2000 and 2009 they played in the second tier of English football, until they gained promotion to the Premier League for the first time in 33 years after winning the 2009 Championship play-off final, but were relegated after a single season.

The club were relegated from the Premier League again on 9th May 2015 with 2 games remaining.

On 2nd May 2016 Burnley regained Premier League status with promotion as winners of the Championship with a 1-0 victory over QPR. 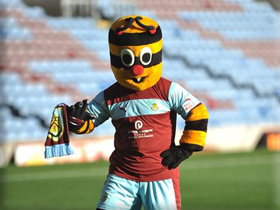 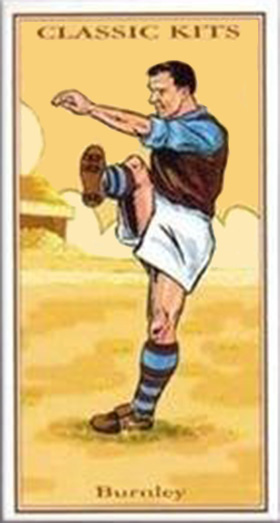