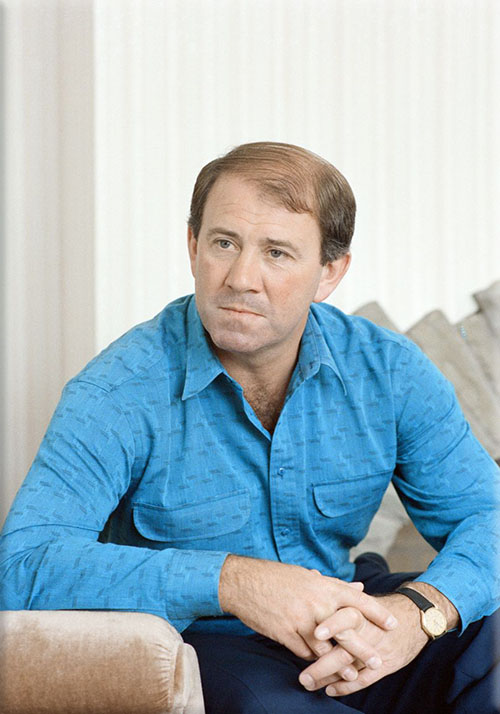 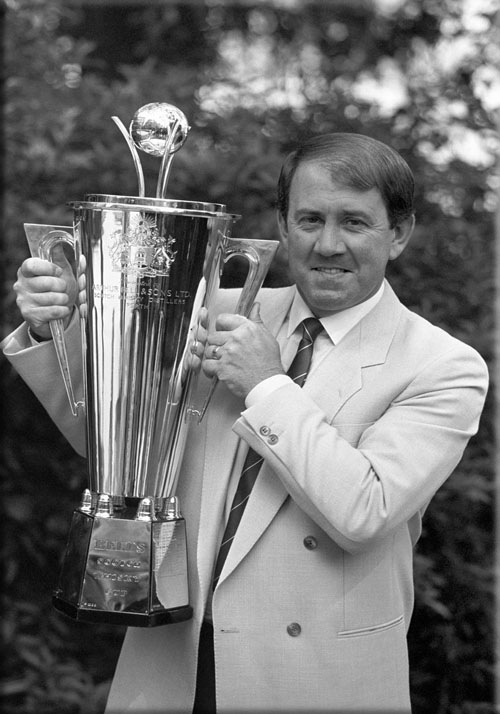 Howard Kendall was an English footballer and Everton FC's most successful manager.

Born in Ryton, County Durham, Kendall joined Preston North End as an apprentice and stayed with the club when he turned professional.

He was a runner-up in the 1964 FA Cup with Preston, and at 17 years 245 days was the youngest player to play in a Wembley final.

In 1967 Kendall joined Everton, where he played in midfield with Alan Ball and Colin Harvey, the trio gaining the nickname "The Holy Trinity". With Everton he won the First Division title, the Charity Shield, and was again an FA Cup runner-up.

He became Everton captain for three years before being sold to Birmingham City in 1974. Kendall joined Stoke City in 1977, where he became a player-coach and helped the club achieve promotion from the Second Division.

He was sacked in 1989, but quickly returned to management with Manchester City. After less than a year in Manchester he rejoined Everton but, after three middling seasons he resigned and spent a short time managing Greek side Xanthi. After a few months spent as manager of Notts County, Kendall joined Sheffield United, saving the club from relegation and then taking them to the 1997 play-off final.

He returned to Everton for third time as manager in August 1997, but left the club by mutual consent having only managed to avoid relegation on the final day of the season. His final managerial position was a four-month spell back in Greece, where he took charge of Ethnikos Piraeus and was sacked with the team at the bottom of the table.

A member of the League Managers Association's "Hall of Fame", the English Football Hall of Fame, and listed as an "Everton Giant", Kendall remains the last English manager to win a UEFA competition with an English club.

Playing career
Kendall joined Preston North End as an apprentice in 1961. He turned professional in May 1963 and played in the 1964 FA Cup Final against West Ham United. At the time he was the youngest player to appear in a Wembley final, his place in the side coming due to the regular left-half Ian Davidson being suspended by the club for an unauthorised trip to Scotland.

He was aged 17 years 345 days and was the youngest finalist since James Prinsep played for Clapham Rovers in the 1879 final aged 17 years 245 days.

Originally a defender, Kendall joined Everton for £85,000 in March 1967 where he was moved into midfield with Alan Ball and Colin Harvey, the trio gaining the nickname "The Holy Trinity".

They were a major component of the Everton team that won the First Division title in the 1969–70 season. In the next three seasons, Kendall captained Everton as the side struggled to build on winning the league with a 17th-place finish in 1972–73.

He was sold to Birmingham City in February 1974 and he spent four seasons at St Andrew's helping Birmingham survive in the First Division.

Kendall joined Stoke City in August 1977 for a fee of £40,000. Stoke under the management of George Eastham had the task of regaining their place in the top flight following relegation.

However poor results in early part of the 1977–78 season saw Eastham sacked and replaced by Alan Durban in February 1978. One of the first things Durban did was appoint Kendall as player-coach and he thrived in the role and his performances earned him the club's inaugural player of the year award.

Durban built the team around Kendall for the 1978–79 season as Stoke finished in third-place gaining promotion back to the First Division. However, despite Durban wanting Kendall to play for him in the First Division Kendall decided to join Third Division Blackburn Rovers as player-manager.

He was assigned as player-manager at Blackburn Rovers for almost two years (1979–81), helping them win promotion back up to the second division in 1980 and narrowly missing out on promotion to the top tier in 1981. Kendall then returned to Everton in May 1981 to play a handful of games, again as player-manager, prior to retiring in December 1981.

Kendall never played for England at senior level, but won caps at Schoolboy, Youth and Under-23 level, captaining the England Youth side to victory in the 1964 Little World Cup Final.

Managerial career
In June 1979 Kendall was appointed player-manager of Blackburn Rovers and took the team into the Second Division in the 1979–80 season. In May 1981 Kendall returned to Everton as player-manager, in the hope of restoring the club to its former glory, although he only played four games before finally retiring as a player.

Initially he struggled and was on the verge of being sacked in January 1984 when results began to pick up with Everton reaching the League Cup final (losing to Liverpool) and winning the FA Cup (beating Watford) at the end of the season.

In the 1984–85 season, Everton won the League Championship, finishing 13 points clear of runners-up Liverpool, and the European Cup-Winners' Cup, defeating Austrian side Rapid Vienna, and reached the final of the FA Cup.

Everton narrowly failed to win both the League and the FA Cup in 1985–86 – second in both to Liverpool – but in 1986–87 won the League again, nine points clear of Liverpool, as the Merseyside clubs continued their stranglehold on the English game.

During his first spell at Goodison Park, he built an almost entirely new team which proved itself as one of the finest of the whole decade. He brought in younger players such as Peter Reid and Trevor Steven from smaller clubs to give them the opportunity to prove that they could compete at the highest level, and was largely successful.

He also brought in "name" players such as Andy Gray, who was instrumental in a season and a half after joining them in late 1983, his goals transforming a struggling side into FA Cup winners and then league champions and European Cup Winners' Cup winners.

He then sold Gray to Aston Villa and brought in Gary Lineker who scored 38 goals in the 1985–86 season.

Kendall left Everton in 1987, frustrated by the ban from Europe of English clubs, to manage Athletic Bilbao in Spain. His time at Bilbao was not a great success, hindered by limitations on the players he could sign for the Basque club.

He did, however, manage to lead them to fourth place in La Liga in his first season, and qualification for the following season's UEFA Cup. He turned down an offer to manage Newcastle United to remain in Spain, but was sacked on 15 November 1989 after a poor run of results, and speculation began immediately about where his next job would be.

There were frequent reports that he would be the next England manager when Bobby Robson eventually departed. On 7 December 1989, he returned to England as manager of Manchester City and secured their survival with a comfortable 14th-place finish.

With the announcement in late May that Bobby Robson would step down as England manager after the 1990 World Cup, Kendall's name was inevitably mentioned by the press as a likely successor. However, he quickly dismissed the speculation and declined an offer by The Football Association to be interviewed for the role, which ultimately went to Graham Taylor.

He returned to Everton for a second spell as manager on 7 November 1990 following the sacking of Colin Harvey, who was re-appointed to the club as his assistant. This was despite the fact he had built a strong Manchester City side that was near the top of the First Division table, and had only just held their cross city rivals Manchester United to a thrilling 3–3 draw at Maine Road.

He famously justified the move by saying that Manchester City was just an affair, but Everton was his marriage. By this stage Everton were battling against relegation to the Second Division, but he turned their season around and they managed to finish ninth and also reach the FA Cup quarter-finals, defeating Liverpool in the fifth round.

Despite the subsequent acquisition of players like Mo Johnston and Peter Beardsley, Everton remained little more than a mid table side during Kendall's second spell and he resigned on 4 December 1993.

After leaving Everton for the second time, Kendall took charge of Greek club Xanthi for a short and largely unsuccessful period. In January 1995 Kendall returned to English football, taking over at First Division Notts County.

The Magpies were struggling badly after a nightmare start to the season, but under Kendall's leadership there was an improvement, with County winning their first two games under his tenure. However, a series of rows with chairman Derek Pavis led to Kendall being sacked in April 1995 – exactly why has never been fully clarified.

The Magpies' poor form continued after his departure and the team were relegated to Division Two at the end of the season.

Subsequently, Kendall joined Sheffield United in December 1995, saving the club from relegation and then taking them to the 1997 play-off final, which was lost to Crystal Palace. Kendall then returned to Everton for third time as manager in August 1997, but left the club by mutual consent at the end of the season having only managed to avoid relegation on the final day of the season.

His third spell was beset by turmoil within the club, working for then chairman, Peter Johnson.

Kendall moved to Greek side Ethnikos Piraeus, but was sacked in March 1999 after only four months in charge and with the club eight points adrift at the bottom of the Greek First Division.

It was Kendall's last role in football management, although in 2001 he revealed that he had "had offers" from a number of English clubs which he rejected, and he expressed interest in the Republic of Ireland managers' job, which was eventually given to Giovanni Trapattoni. He remains the last English manager to win a European competition with an English club.

Kendall was inducted into the English Football Hall of Fame in 2005 in recognition of his contribution as a manager to the English game. He died on 17 October 2015 at the Southport and Ormskirk District General Hospital at the age of 69.