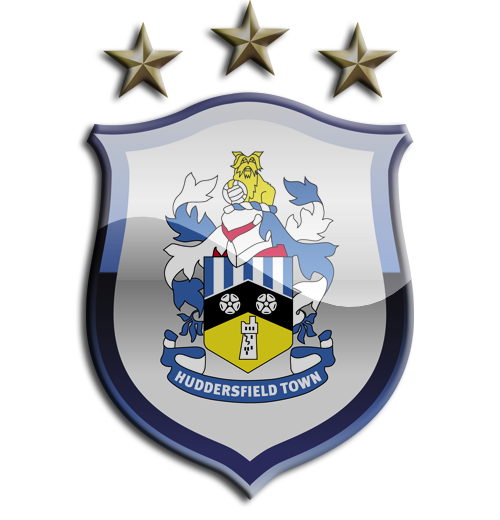 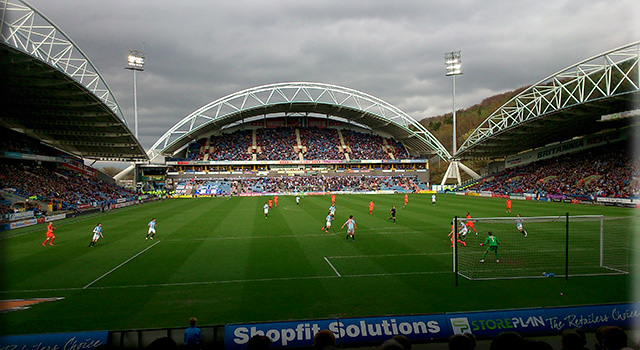 Kirklees Stadium (known as the John Smith's Stadium due to sponsorship), is a multi-use sports stadium in Huddersfield in West Yorkshire, England. Since 1994, it has been the home ground of football club Huddersfield Town and rugby league side Huddersfield Giants.

During planning and construction, the stadium was referred to as the Kirklees Stadium. It was built by Alfred McAlpine, designed by HOK Sport and was awarded the RIBA Building of the Year award for 1995.

The decision to build a new stadium for Huddersfield Town was made in August 1992. Construction began the following year and it was completed in time for the 1994–95 season, enabling the club to move to its new base after 86 years at Leeds Road.

When the stadium opened only the two side stands (the Riverside and Kilner Bank stands) were ready. The South Stand was opened in December 1994. Construction on the North (Panasonic) Stand began in 1996 and it was completed in 1998, bringing the overall capacity of the stadium to approximately 24,500. The estimated cost of construction was £40 million.

The record attendance at the stadium is 24,129 for an FA Cup fifth round match between Huddersfield Town and Manchester City on 18 February 2017. The record for a rugby league match is 24,126 for an Ashes match between Great Britain and Australia on 22 November 2003.

Ownership
Initially, the stadium was owned by a consortium made up of Kirklees Metropolitan Council, Huddersfield Town A.F.C. and Huddersfield Giants in a 40:40:20 proportion. Following the purchase of Huddersfield Town F.C. from the administrators, Ken Davy became chairman of both sports clubs, which are owned by companies he controls.

The present ownership of the stadium is Ken Davy's company, Huddersfield Sporting Pride owns 60% and Kirklees Metropolitan Council 40%. The current Managing director of the stadium company is Gareth Davis who succeeded Ralph Rimmer in 2010. On 24 December 2009, Huddersfield Town announced that 40% of the shares owned by Huddersfield Sporting Pride would be transferred to the football club, owned by current chairman Dean Hoyle, but the deal was delayed due to a rent dispute between Davy and Hoyle. The deal was finally completed on 3 September 2013.

North Stand - Capacity – (seating)
The North Stand, known as the Fantastic Media Stand for sponsorship reasons, is located behind the goal post at the north end of the ground. It has two tiers and houses 16 hospitality boxes and is completely seated. The lower tier contains temporary seats that can be removed for concerts or other events.

East Stand - Capacity- 7,000 (seating)
The East Stand known as the Kilner Bank Stand or the Britannia Rescue Stand for sponsorship reasons is a large single tier stand that runs along the side of the pitch and is completely covered seating. The stand also holds the TV gantry.

South Stand - Capacity- 4,054 (seating)
The John Smiths South Stand as it is known for sponsorship reasons is an all seated stand built into a bank and is completely covered as well as having the big screen is used by away fans.

West Stand - Capacity- (seating)
The West stand is the main stand and is known as the Revell Ward Stand for sponsorship or Riverside Stand. It has two tiers and 26 hospitality boxes and incorporates the player changing rooms, tunnel, dug out, ticket office and club shop.

Sponsorship
From 1994 until 2004 the stadium was known as the McAlpine Stadium. Alfred McAlpine had been the main construction contractor and its name was part of the payment contract for ten years. The company elected not to renew its sponsorship which was taken up by Galpharm Healthcare, leading to the new name. Individual stands are sponsored by local businesses. On 19 July 2012, it was announced that the brewery firm, Heineken had bought the sponsorship rights for the stadium using their domestic John Smith's Brewery as the beneficiary, and as such the stadium was renamed as The John Smith's Stadium on 1 August as part of a 5-year deal. 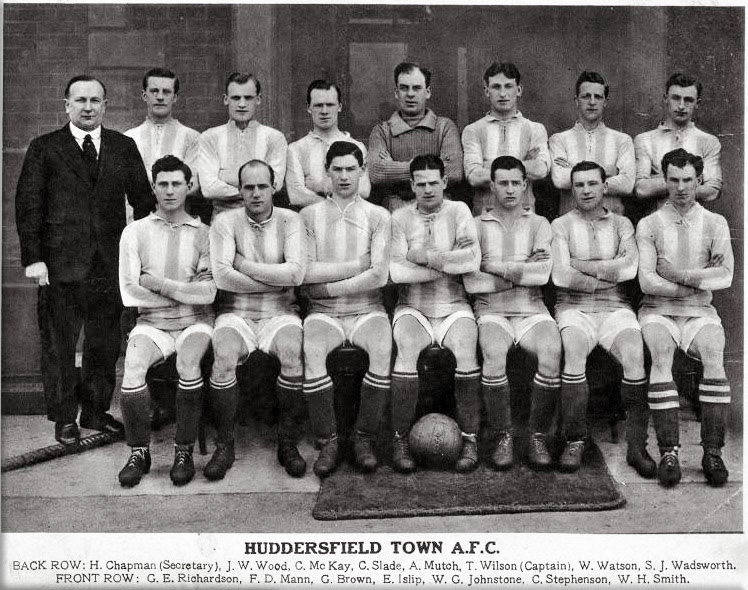 In 1910, just three years after being founded, Huddersfield entered the Football League for the first time. In November 1919 a fund-raising campaign was needed to avoid a move to Leeds. Citizens of Huddersfield were asked to buy shares in the club for £1 each, and the club staved off the proposed merger. The team went on to reach the 1920 FA Cup Final and win promotion to Division One.

In 1926, Huddersfield became the first English team to win three successive league titles – a feat that only three other clubs (Arsenal FC, Liverpool FC & Manchester United FC) have been able to match. Huddersfield Town also won the FA Cup in 1922 and have been runners-up on four other occasions. During the club's heyday, on 27 February 1932 the club achieved a record attendance of 67,037 during their FA Cup 6th round tie against Arsenal at Leeds Road. This attendance has been bettered by only 13 other clubs in the history of the Football League.

After the Second World War, the club began a gradual decline, losing its First Division status in 1952. Town came straight back up, then were relegated three seasons later. Fourteen years later, they would return to the top flight for the last time (so far) in 1970 but were relegated two seasons later and have since meandered through the lower three divisions. Before the start of the 1969/70 season, Huddersfield Town adopted the nickname "The Terriers".

In 1998, the club attracted the attention of local businessman Barry Rubery and, after protracted takeover talks, he took over the running of the club, promising significant investment as the club sought Premiership status. However, the club did not make it back to the top flight and fell two divisions. The club was sold by Rubery to David Taylor and under Taylor's ownership, slipped into administration. In the summer of 2003, the Terriers came out of administration under the new ownership of Ken Davy.

At the start of the 2004–05 season, the stadium was renamed the Galpharm Stadium, to reflect the sponsorship of this local healthcare company.

On 26 May 2012, following a penalty shoot-out in the 2012 Football League One play-off Final victory over Sheffield United, Huddersfield were promoted to the Championship. The shoot-out was the longest contested in the current League One play-offs format. After eleven rounds, the final score was 8–7 to Huddersfield, with the winning goal being scored by goalkeeper Alex Smithies.

In February 2013, Simon Grayson was sacked and Mark Lillis was put in charge as caretaker manager until the club appointed Mark Robins as manager. Robins left the club after the first game of the 2014–15 season that saw Huddersfield Town lose 4–0 at home to AFC Bournemouth (who won the league). In September 2014, Chris Powell was named the new Huddersfield Town manager. He was sacked on 3 November 2015, for "failing to meet the club's objectives".

The following day, ex-USA international David Wagner was appointed head coach, becoming the first person born outside the British Isles to manage the club in their 107-year history.

On 29 May 2017, the club successfully earned promotion to the Premier League for the first time and the English top flight for the first time since 1972, beating Reading 4–3 on penalties following a 0–0 draw in normal time in the Championship play-off Final.

David Wagner signed a 2 year extension to his contract on 30th May 2018, keeping him at the club until June 2021. However, on Monday 14th January 2018, Wagner left Huddersfield Town by mutual consent with the club bottom of the Premier League.

On 9th September 2019, Huddersfield announced that they had appointed Danny Cowley as their new manager, with Cowley's brother Nicky as assistant manager. 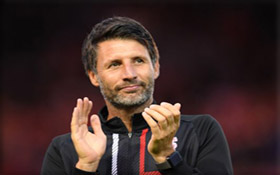 
Huddersfield Town Association Football Club are a professional football club based in the town of Huddersfield, West Yorkshire, England.

The team is set to compete in the Premier League after winning promotion via the 2017 EFL Championship play-off final.

In 1926, Huddersfield became the first English club to win three successive league titles, a feat which only three other clubs have matched, and none have bettered.

The first two league titles were won under their manager Herbert Chapman, who also led the club to the FA Cup in 1922.

In the late 1950s the club was managed by Bill Shankly and the team featured Denis Law and Ray Wilson.

After two seasons in the top division in the early 1970s the club spent 45 years in the second, third and fourth tiers of English football before being promoted to the Premier League in 2017 under their manager David Wagner.

Nicknamed The Terriers, the club plays in blue and white vertically striped shirts and white shorts. They have played home games at the Kirklees Stadium since 1994. The stadium replaced Leeds Road, Huddersfield Town's home since 1908. 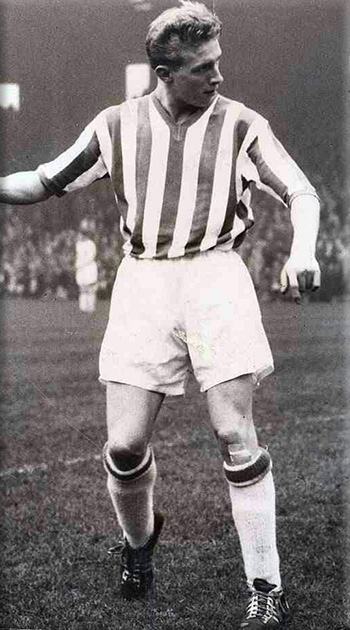 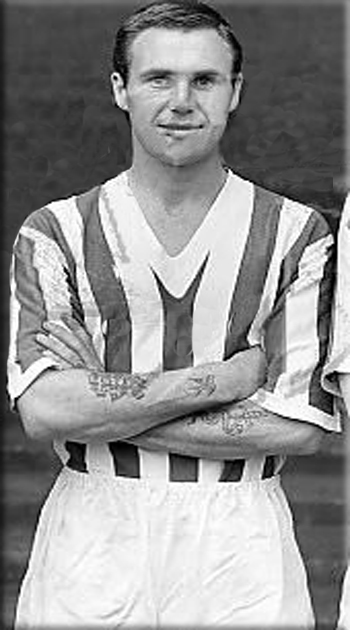 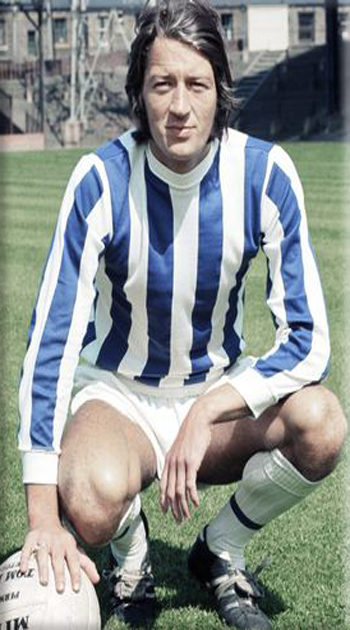