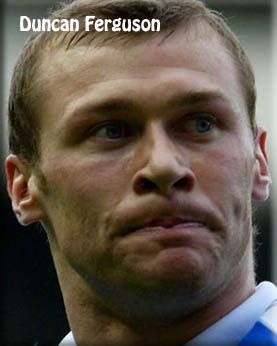 Duncan first joined the Blues in 1994 after spells at Dundee United and Glasgow Rangers and he quickly became an idol of the faithful after scoring his first goal in a Merseyside derby at Goodison.

He regularly terrorised Premiership defences and won an FA Cup winners medal in 1995 before moving to Newcastle United in a shock transfer deal in 1998.

However, after a somewhat disappointing time in the North-East, then Deputy Chairman Bill Kenwright plotted to bring the hero of the Gwladys Street back to what he termed his 'rightful home'.

After protracted negotiations Duncan made his Merseyside return on August 17, 2000 and, in typical story-book fashion, scored two goals on his 'second' home debut against Charlton Athletic.

When he first arrived David Moyes made Ferguson his captain.

His marauding performances, mainly as a substitute, during the 2004/05 led to Ferguson agreeing a new one year deal at Goodison in the summer of 2005.

He was mainly utilised as a substitute during the 2005/06 campaign.

His final appearance for the Blues came on the last day of the season, leading the side as skipper and netting the last-minute equaliser in a 2-2 draw with West Bromwich Albion.

The striker was not offered a new deal, prompting the end of his long association with the Blues as a tough, no-nonsense centre-forward.

Having spent five years in Majorca following his retirement from playing, Ferguson contacted his former manager at Everton David Moyes and talked about the possibility of working with the academy players.

Initially Ferguson was a voluntary worker at the academy, working for fellow Glaswegian Alan Irvine, a former mentor of his from his playing career.

He enrolled on a nine day Scottish FA organised coaching course in Largs, Scotland to earn a UEFA B-License.

In May 2012, he returned to Largs to achieve a UEFA A license and in January 2013 he enrolled on a further course and is working towards a UEFA Pro-License

Ferguson was rewarded with the position of First Team Coach in February 2014.

On 5th December 2019, Ferguson was made Caretaker Manager following the decision by the Everton board to sack Marco Silva, and held his first press conference on Friday 6th December ahead of his first oppenents Chelsea.

After the appointment of manager Carlo Ancelotti, Duncan took up the Assistant Manager role.

He was awarded the 'Howard Kendall Award' following the 2019-20 campaign.