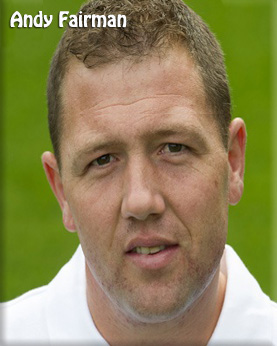 Andy Fairman joined Everton in July 2013 to take up the position of Under-21s goalkeeper coach.

Fairman moved from Wigan Athletic where he had previously worked alongside Roberto Martinez and Inaki Bergara.

His main responsibilities at Everton are to coach and deliver the first-team goalkeeping philosophies and core values to the Club’s young, upcoming goalkeeping talents.

Fairman boasts vast experience having previously coached at Rochdale, Preston North End and Blackpool. During his spell at the latter, he helped Matt Gilks earn a first international call up for Scotland.

Throughout a coaching career which has to date spanned over 16 years, Fairman, who also has a BSc degree in Sports Studies, has worked with over 30 international goalkeepers at all levels.

As a player, Fairman was on the books at Blackburn Rovers and Blackpool’s academy and played for several non-league clubs at first-team level before committing his career to coaching.